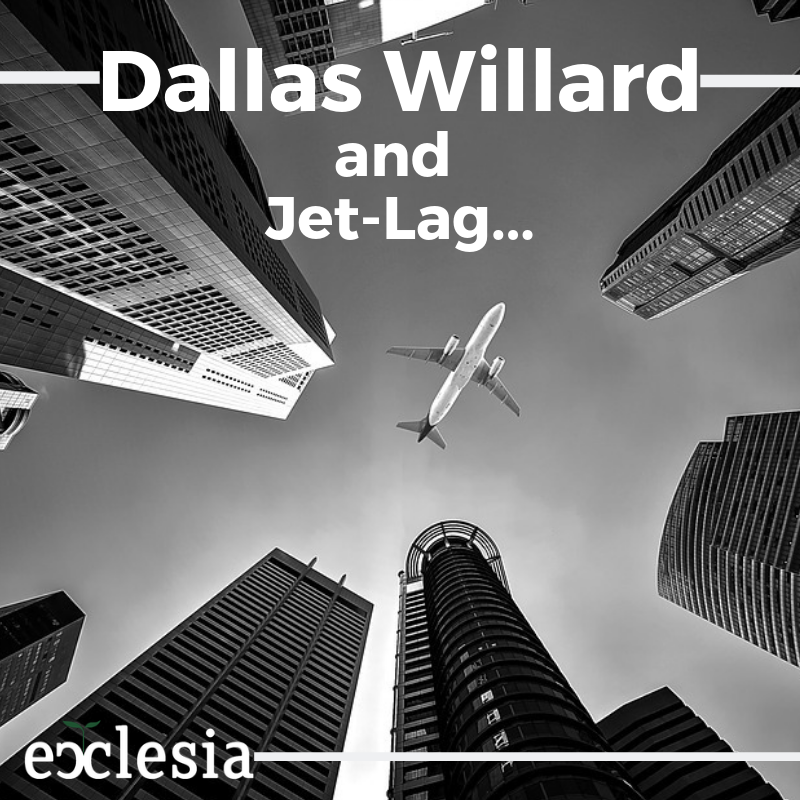 What do you say to a distinguished professor of Philosophy at USC who has chosen in his spare time to write life-changing books like The Divine Conspiracy and speak to Christians regularly about spiritual practices and disciplines?

But as I got stuck sitting by him, against my will, at the Ecclesia National Gathering I felt like I should say something to him rather than endure the awkward silence that surrounded us. I didn’t realize our short conversation would leave me thinking for weeks.

I opened with, “So, did you get in from California yesterday?”

I waited for a few awkward seconds but that was clearly the only thing he intended to say. I followed up with: “Still on California time?” An innocent and somewhat silly question, but I was nervous and was feeling pretty wrecked myself after having just arriving from Portland the day before. His response was not what I expected.

“Let me tell you something” he said gently as I can imagine a grandfather saying to one he loves. “I used to travel a lot, and I particularly remember a 14 hour flight to South Africa where they practically had to scrape me off the plane. It was then that I heard the Lord tell me very clearly, “Dallas, when you travel I want you to do three things: fast, prayer, and memorize scripture. And if you do those things, I will sustain you.” He continued, “And so I started doing those three things anytime I flew longer than 2 or 3 hours and since then I’ve never felt the effects of jet-lag again. He has sustained me.”

People like Dallas Willard are special not just for what they say, but because they model what a faithful Christ-follower looks like. After you hear or interact with such people, you’re not just left with great ideas, but with a desire to be the quality of person that they themselves are. It’s easy to find pastors who are wise and give you great ministry advice, it’s a lot harder to find pastors who you see and think, “I want to be like that person because they are like Jesus.” I hope that when I’m 75 years old, people will say that about me. But I know for now I have quite a distance between where I am and what I aspire to be. I also know that Dallas Willard didn’t become the kind of person he is naturally or easily.

I don’t aspire to be a “famous” pastor. Nor do I aspire to write a great book, speak at conferences, be known by a lot of people who have tons of twitter followers, or make a name for myself. I simply want to be the kind of person who has the depth of friendship with God that people like Dallas Willard have cultivated over the years. If I can model for people what that looks like as I grow older, I will feel more than successful.

Dustin grew up in a small farming community in Central Illinois, helped to plant a church in New York City after college, and has led a college ministry in Tampa, FL. He has a BA in Preaching and Bible from Lincoln Christian University (Lincoln, IL) and an M.Div from Western Seminary (Portland, OR). He loves his wife Kelli, two boys; Gram and Owen, and his little foster daughter. He’s a homebrewer, an avid reader, and an obsessed Cubs fan. You can check out his old blog he rarely updates here and his homebrew blog here.