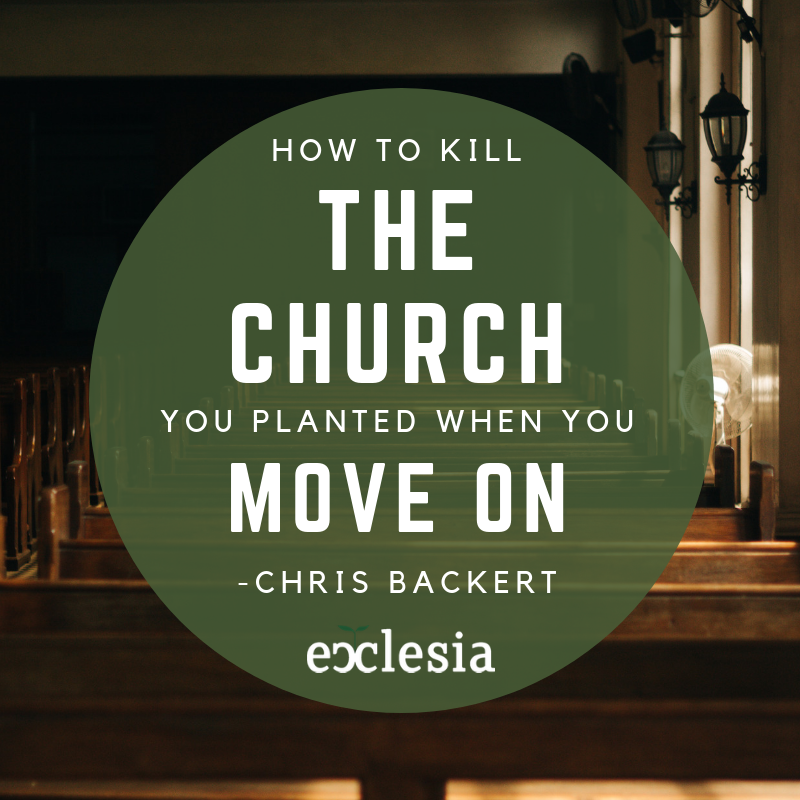 There are some occasions when I wish that I was an actual Bishop.  One of those repeated moments is when I find out that a church within Ecclesia is about to go through a pastoral transition.  In fact, I cringe almost every time that I first get the news.  Quite honestly this is born out of the pain of seeing several new churches (and some within Ecclesia) carry out the process of transition so poorly.  Normally, the transition decimates them to the degree that it sets the congregation on an inevitable path of closure.  What is most unfortunate about this is that prior to the change, they were actually quite vital.  Up until recently, Ecclesia has offered help in each of these situations for the churches in our network (and even some without).  I can tell you that in the situations our outside guidance has been received, the church has found itself on a good path.  In those situations where it has not (which is more often than I wish) in every situation, the church has been crippled or killed.

Transitions are hard for all churches, but they are particularly hard for churches that have never gone through them before.  I’m not saying that the Ecclesia staff or other member churches are all knowing when it comes to pastoral changes, but in an abundance of counsel there is wisdom.  More than likely, our collective experience is greater than any of our individual churches.

Here are the common mistakes I see made for younger congregations.

Mistake # 1:  The Lead Pastor or Founding Pastor assumes that the church they started will be fine.  They are almost always wrong.  If a church has been around a few dozen years and has seen a transition or two, they have weathered these storms before.  They are also not nearly as likely to be as attached to the pastor, as they have already had a few.

Mistake # 2:  The Lead Pastor or Founding Pastor leaves too quickly.  For most churches, a month between announcement and departure is a good timeline.  If it’s a retirement, longer is better and more tenable.  However, in most new congregations, longer is needed.   Usually 3-6 months is ideal.

Mistake # 3:  The church chooses the wrong interim leadership plan.  If the transition of the Founding Pastor cripples a new congregation, the wrong interim leadership plan is often a death blow.  The most honest reason for this is that young congregations are overwhelmed at the departure and also over stretched in time.  Typically they will choose interim leadership without the qualification that they cannot be considered for long-term leadership.  It should be clear that all interim situations cannot be the eventual situation to all parties.  Obviously, there may be rare exceptions, but they should be considered only at the very end of a leadership search or discernment process.

Mistake # 4:  The church chooses the wrong successor or successors to the founding pastor.

More often than not, they choose someone internal to the congregation.  This may or may not be a good choice.  However, in our network, it should be a choice where other Ecclesia leaders look at and say “that makes sense”.  I have seen too many churches fail to heed our council.  None of them have done well.

It is common practice to receive outside guidance during transition and for a new leadership situation to be affirmed from those “close” but not “in” the congregation.

Mistake # 5:  In a shared leadership situation, it is assumed that one of the other leaders is the right choice.

This is a further application of the previous mistake.  Shared leadership is a complicated scenario.  Whereas I used to be an advocate of shared leadership, I now see its many pitfalls, despite my internal optimism that it should “work”.  Its pitfalls are often most obvious in times of transition.  The major problem with shared leadership is there is the lack of an honest account of “why” it works when it does.  My experience on this is wide-ranging and I only know of 3 situations where those in shared leadership had an internal and shared understanding of why it works and the gifts they each bring.  When that happens shared leadership can be beautiful, when it does not, transitions expose the cracks that were typically unspoken or obvious to those outside.

Mistake # 6:  Not involving the founding pastor in the future direction.

While I can often understand the rationale for excluding the previous leader in the future picture, among those who have started the church, I believe it should be held open for their inclusion.  I further believe that an external reference should be a primary guide on whether or not they should be.  From one angle, if the transition has come under good and noble circumstances, then there is likely no person more vested in seeing the church thrive upon their departure.  They also have a certain objective proximity that is invaluable.  The main reason I would suggest not involving them is if they have any associations of guilt or burnout with their departure.  These two realities typically make the founder un-objective.

Why am I communicating this now?

I’ve noticed these things for a long while and wanting to maintain our value of the “primacy of the local church” I have always offered to help in transition, but have been quiet when it has not been received.  I know there are churches within Ecclesia going through transitions right now, and it’s possible that they will read this with an assumption that it is written for them specifically – it is not (though it is written for them generally).

I’m breaking my silence on this now for two reasons.  First, I’m very tired of seeing churches in Ecclesia (and those like our congregations) decimated by poor transition.  Almost always they are decimated needlessly.  I am also observing, at this very moment, what appears to be the conclusion of a very good transition that Ecclesia was involved with and our outside input was greatly considered.  Second, I’m returning from speaking to the entire Kentucky Methodist Annual Conference which happened to coincide with the retirement of Bishop Lindsay Davis.  It was a joy and honor to attend his retirement celebration.  He had been a good Bishop and it was obvious.  His help and wisdom in seasons of difficulty within churches and the conference was particularly valued.  Of course, he had the authority in which his help was not in question.

While I am not a Bishop, I have a Bishop’s care.  The least I can do is speak plainly and provide a warning to all our churches and those like them elsewhere.

Working with church leaders to develop new expressions of Christian community and connecting those congregations together is the passion of Chris’s life.  He has served as National Director of Ecclesia since it's beginning and has been part of several congregations within the network both in Virginia and Maryland.  In addition to his role with Ecclesia, he also helps spearhead Fresh Expressions US and Missio Alliance.

Chris holds a D.Min. in Missional Church Leadership from Fuller Theological Seminary where his focus was on the importance of church networks for the future of mission in North America.  He currently lives just north of Harrisburg, PA  with his wife Rachel, daughter Elliana and son Jase.

Because Ecclesia is striving to be a relational network of churches, our process for joining … END_OF_DOCUMENT_TOKEN_TO_BE_REPLACED