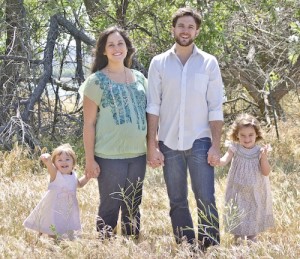 We are proud to welcome the Stepro family and Kairos Antelope Valley into Ecclesia.  They are in the first year of their new congregation and we are excited to see what God is doing.

Here’s their story in Noah’s own words …

I grew up in the Antelope Valley. The Antelope Valley is a weird place and hard to understand if you are not from here. We are number 2 in meth production and number 1 in child abuse in the nation. It is a suburb of LA that popped up in a rather ugly area because of the post-war military-industrial complex of the aerospace industry. So we have a good number of engineers and rocket scientists as well as an agricultural population that has been around for a long time. However, beginning in the 60’s we saw a great growth of commuters, moving up here to get more affordable housing while driving an hour or more to work in LA. This hunger for more in terms of materialism is a good reflection of the values of the AV. Most people here would rather have a new car or jet-ski’s than live and work close to their neighbors or have more time with their children.

Another proclivity about the AV is the growth of gang and urban poverty that we have experienced over the last 20 years. Families from Pacoima and Compton have relocated in mass adding to the social dynamic of a decentralized, scattered place. During the 80s and 90s Palmdale (one of the main cities) was the second fastest growing area in the nation…behind only Las Vegas. This is the placed that shaped me. I grew up in a fairly poor family here. I dropped out of school in the 7th grade and shortly after came to know Christ at a church around the corner from the trailer park I lived in. I had a pretty radical conversion as I encountered a community of friends and leaders that were sharing life together, experiencing the power of the holy spirit and going on mission with each other. I was sold!

Flash forward to adulthood I began to discern “the call” to serve God by entering into “the ministry”. In order to do this I knew returning to school was probably a necessary step. Entering Jr. College with a 7th grade education was challenging to say the least. But at 19 I knew this was a definite step the Lord was directing me to take. I began volunteering heavily at the mega church where I came to faith. Upon completing a bachelor’s degree in history I started working at the church part time as a youth/worship leader and entered Fuller Seminary to earn a MDiv.

I began seminary in 2005 and the next summer I got married to Jamie, a beautiful, wonderful woman I had been dating for 4 years. After getting married I went through a succession of promotions at my home church while attending seminary – full time – college pastor – jr. high pastor. Then after graduating in 2008 from Fuller I became the Student ministries pastor. I was leading a ministry of about 500 students with a staff of 3 employees and an army of volunteers. I was full on in the swing of attractional, programatic church. I was successfully leading a “successful” youth group…that oddly no longer looked like the youth ministry that I had joined as a teenager and had lost the potency of mission and purpose that hooked me in the first place.

Through several years of painful, honest conversations with the sr. leadership I had concluded I would rather work as a barista at the local coffee shop and serve Jesus with community of friends than be in full time ministry…if full time ministry simply meant fueling a machine that wasn’t producing much lasting fruit. God had some interesting plans however…

As I was writing out my letter of resignation I received a call from a small, dying Presbyterian church…they were looking for a youth/associate/turn-around pastor. They hired me and my wife to come to the church with the goal of reaching their changing neighborhood and connecting with younger generations. Well, after an amazing 2 month honeymoon period in which I saw conversions, works of the holy spirit and the bubblings of community in this fledgling church – the senior leadership of the church resigned and the congregation went into a tailspin.

At the same time, God had opened another amazing door for me to come on staff at our local college as an adjunct professor of American history. We left the Presbyterian church as gracefully as possible and gathered a small group of our good friends together.  I remember telling them: “I love Jesus, I need community, but if we cannot start a church that is free of the shackles of what I have experienced – I don’t think I am going to go any more.”  It may not have been the best way to start a new church…but a church planter once told me…”if you don’t have to start a new church…don’t!”

Kairos Community was birthed out of a lot of prayer, pain and desire to meet God in the context of community. We met as a core team for several months on Friday nights developing a common vision, language and mission. We visited churches of all denominations and creeds together on Sundays and finally began worshipping in a living room at the end of 2011.  We quickly out grew the living room and moved to a coffee shop and then a small church building that wasn’t being used on Sundays.  It was at this time that I connected with Ecclesia as well. I began meeting with Greg Larson and the equippers down at Kairos-Hollywood.

With a firm commitment to discipleship and mission as the core of what we are doing, we were very slow to invite others in prematurely or to grow beyond our capacity. The past summer we got the opportunity to meet on the third floor of a downtown Urban Outfitters-ish type store…since then we have had a strong commitment and presence in our city…prayer walking, serving the needy, creating community where ever we can and with consistency.

This fall, at our one year mark, we launched our pilot Missional Community. We had waited to launch this expression of our church until our leadership was developed and discipleship was at the core of our identity…our DNA. We have seen wonderful fruit in the last year as God has preformed miraculous healings, changed lives from darkness to light and spread hope where there was none. We have seen single mothers, homosexuals, drug addicts, empty materialists, fundamentalists and entire families come to faith…I can’t wait to see what God has in store for the next year!

Somewhere in between getting married and church planting, Jaimie and I have been blessed with three beautiful girls: Clover (4), Paisley (2) and Ember (4 months). During the last year, Jaimie…in addition to teaching piano and leading worship at Kairos has begun working as a Compassion Entrepreneur for a new non-profit called Trades of Hope…a company aimed at women helping women all over the world start and maintain sustainable business.

We are excited to be part of the Ecclesia family and thanks to all for welcoming us in.